I was asked to do hair & makeup for the 2014 Chicago Auto Show this year, and it turned out to be a fun early morning gig at McCormick Place. Before the Auto Show opened to the public, Kia had their Press Conference unveiling their 2015 Kia Soul EV Electric car and the Kia K900 to reporters from around the world. Most of America caught their first glimpse of the K900 during the 2014 Super Bowl XLVIII Matrix-inspired Kia TV commercial featuring Laurence Fishburne.

What was fun about this, is that Kia tied their unveiling in really nicely to a Chicago theme I really love, Chicago Blues. Local Chicago Band, Honey and The 45s were asked to play as part of combined live stage show and big screen visuals depicting the progression of Chicago Blues from acoustic to electrified and beyond. They tied their progressive story line to the progress of the Kia company and of the automobile, to present day electric cars. Enter the Kia Soul EV Electric Car and the Kia K900. I, however, was given instructions to take the girls in the band back to a 40’s look and feel. As always, time is limited, and I had to get the girls into 40’s waves, lashes, liner and red lips in between sound checks and costume changes.  There was also makeup for the Marketing Director and CEO of Kia, scheduled to give presentations. I had to work fast, stay organized and be on my game as far as time management. Live show, worldwide coverage, and hair and makeup being late would not be a good day at work for me. Well these girls couldn’t have been sweeter to work with and made my day super smooth. Check them out on the video above. 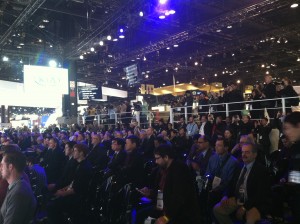